The monostich is a one line poem (not including the optional title). “The Cathedral is” by John Ashbery (b. 1927) was my first introduction to this poetry form. This poem-illustration pair was originally part of a longer early blog post I wrote about micropoetry (if you’d like to take that trip down memory lane, you can right here!), but I thought that it deserved some solo time in the spotlight – especially after my one word poem yesterday. Photo collage (of the Pooh Stump at Harvard) and composition by me. Have a lovely weekend!

“The Cathedral is” by John Ashbery (b. 1927), photographs (of the Pooh Stump at Harvard) and composition by me.

“Coward” by A.R. Ammons (1926-2001), photograph and composition by me.  A monostich is a single line poem with or without a title. It is fascinating to think of what constitutes a “minimal set” of characteristics or requirements for a poem – does a single line suffice? How many words to we need? Can symbols replace words? Terry Ehret used an Egyptian hieroglyph as the title of one of her prose-poems: 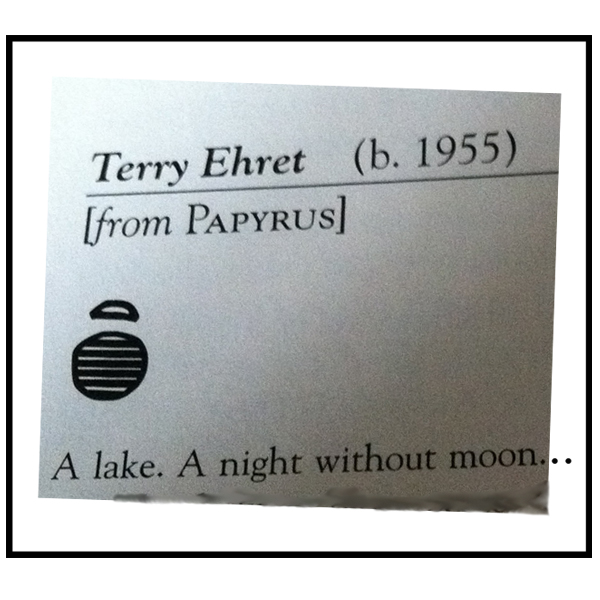 Excerpt from [Papyrus] by Terry Ehret, from Lost Bodies. Here the title is replaced by a symbol and begins her prose-poem that interprets it.  Can a title with a symbol be a poem?

Poem (if you will), drawing of the international symbol for “caustic chemical” (ink on paper), by me.  Do extremely short poems live at the intersection of poetry and art?

Some monoprints I did as part of my response to the Kick-About #11 prompt "Exoplanet Trappist-1e" (which I proposed!) I wound up doing a grid of these abstract planet prints, drawing directly on the inking plate and having a good time at seeing what came up on the paper. Hop over to https://marcyerb.com/ to see the finished grid of planets and https://reds-kingdom.blog/ to see the whole group of responses to this distant and potentially habitable planet by a bunch of really talented artists!
More small squares in my life, but this time on Enzo the cat’s favorite quilt.
Another art card that went out - in response to a call for postcards about what our quarantine life looks like. I thought about all the zoom meetings and facetime calls I've been on and so my quarantine looks like a lot of small squares...
Mail art that just went out! Experimented with a new-to-me transfer medium - light pumice gel. It gave the postcard a lot of texture and a grey sheen.
Ms. Tanzie looking curiously at the grey plastic box being pointed her way. The noise of the polaroid is usually enough to preclude a second picture anyway...
Art is everywhere - chalk on our blue painted back steps by my son - or clouds in the sky as he called them. Who am I to argue?
Loading Comments...
%d bloggers like this: