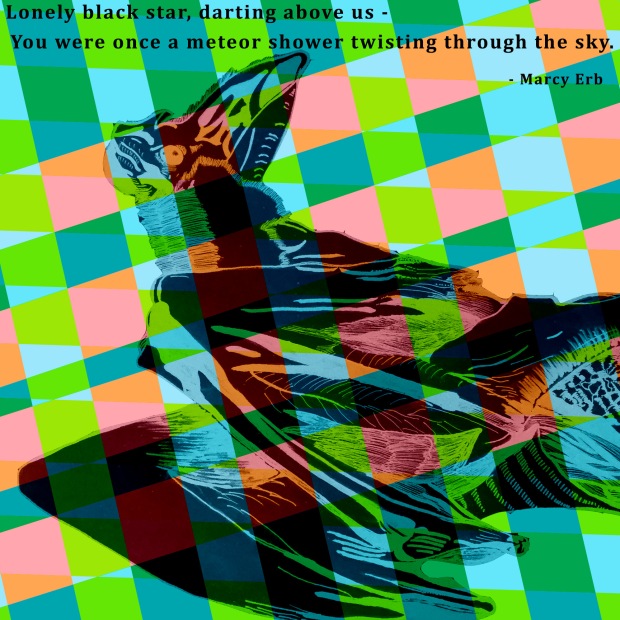 Right before Halloween, Ms. Kerfe Roig of MethodTwoMadness posted a beautiful drawing of a bat and wrote about the precarious conservation state of most bat species (check it out here!). Many years ago, I attended a presentation by a scientist from the U.S. Fish and Wildlife Service where he detailed the efforts to find the origin of White Nose Syndrome in bats. White Nose Syndrome is a fungal disease that is decimating bat populations in the eastern U.S. It turned out that a hiker in New England – not a scientist or a Forest Service employee – provided the photograph of the bat that had been identified as “patient zero” of the epidemic. I have always been struck by that fact – that any one of us could be the singular witness to an important ecological event and that what we see and remember is so significant. Today’s poem and illustration are inspired by the memory of the bats I would see as a child and Kerfe’s post. Poem, drawing, and mixed media collage by me. Have a great Friday!

Some monoprints I did as part of my response to the Kick-About #11 prompt "Exoplanet Trappist-1e" (which I proposed!) I wound up doing a grid of these abstract planet prints, drawing directly on the inking plate and having a good time at seeing what came up on the paper. Hop over to https://marcyerb.com/ to see the finished grid of planets and https://reds-kingdom.blog/ to see the whole group of responses to this distant and potentially habitable planet by a bunch of really talented artists!
More small squares in my life, but this time on Enzo the cat’s favorite quilt.
Another art card that went out - in response to a call for postcards about what our quarantine life looks like. I thought about all the zoom meetings and facetime calls I've been on and so my quarantine looks like a lot of small squares...
Mail art that just went out! Experimented with a new-to-me transfer medium - light pumice gel. It gave the postcard a lot of texture and a grey sheen.
Ms. Tanzie looking curiously at the grey plastic box being pointed her way. The noise of the polaroid is usually enough to preclude a second picture anyway...
Art is everywhere - chalk on our blue painted back steps by my son - or clouds in the sky as he called them. Who am I to argue?
Loading Comments...
Comment
×
%d bloggers like this: